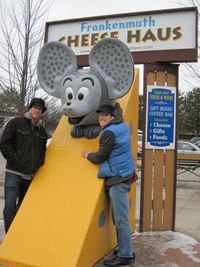 Join brothers Jarod and Jeremy Facknitz as they reunite as a duo for their first public show in 9 years at The Gold Room in Colorado Springs, Colorado on Friday, November 5th 2021. Doors at 6pm, music at 7pm, $10 cover, 21 and over.

Jarod and Jeremy Facknitz shared a bedroom through childhood and into young adulthood, long after it was no longer required of them to do so. "We were each other's first spouse!" they say, only somewhat-jokingly.

Shy and socially awkward, the brothers found salvation through music in the mid-1990's and joined "The Ottomans" in 1997. They went on to earn a Detroit Music Award in 2001 as "Best New Alternative Band", beating out a little-known band at the time called "The White Stripes".

While "The White Stripes" went on to mega-stardom, "The Ottomans" parted ways in 2002.

Jarod and Jeremy continued to release music and perform under the moniker "Standing Room Only", strumming, stomping and screaming through coffee shop tours of the midwest. They released two albums of original material and later a live album; all of which are solely available in physical form (not online).

In 2003 Jeremy left southeastern Michigan, and the duo parted ways.

Jarod's 2004 release "The Return of The Molly Maguires" was nominated for a Detroit Music Award in the "Best New Album" category. Shortly thereafter he joined forces with Kevin Golden to form "Beaten By Yuri" earning a small but loyal cult following and glowing critical acclaim in the U.K. Since the demise of "Beaten By Yuri" in 2010, he has performed as a rock/pop and jazz drummer for various groups in Chicago and has just recently moved to Colorado Springs.

Jeremy carved out a living performing at bars, coffeeshops, and corporate events while teaching lessons on the side. "I was happy to be making a living performing music, but my original music wasn't being heard, and as the years passed I found myself more and more frustrated playing to little more than the din of drunken conversation." Things came to a head on July 17th, 2017 when Jeremy was diagnosed with viral meningitis. "I came face to face with my mortality, and I realized it was time for a change. I quit playing the bars and spent the next year making the leap to house concerts, touring, and performing solely for listening audiences."

The leap has paid off. Jeremy was named a top 24 finalist from over 700 entries in the 2020 Grassy Hill Kerrville New Folk Songwriting Competition at Kerrville Folk Festival. His song "Ballet of an Unhatched Chick" was awarded semi-finalist distinction at songoftheyear.com for 2020. He continues to book shows in the United States, Canada and the U.K., while making his home in Colorado Springs.

As an acoustic duo the brothers combine their individual intensity, strength and 10,000 hours of experience to the stage in one explosive musical package.

Cover is $10 and the show is 21 and over. Doors at 6pm, music starts at 7pm. Watch the show live from anywhere in the world at goldroomlive.com. More details to come.

See Jarod and Jeremy Facknitz performing Jarod's song "Love Divine" on the back of a train from Chicago headed to New Orleans on December 18th, 2015: https://www.youtube.com/watch?v=mLKtvVvhGXI